About the history of Kurort Rathen 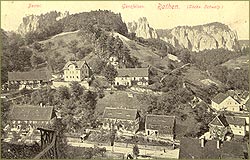 The origin of first dwellings in Rathen is still unknown. The first proof of existence was documentarily stated on 29th November 1261. In this document an argument was written down between the Bishop of Meißen and some noblemen, among them Theodericus de Raten. A document of 6th March 1361 states that there were already two fortresses at those times called Altrathen and Neurathen.

The local nobility were the noblemen of Michelsberg , Duba and Ölsnitz. After the last knight of Rathen, Hans von der Ölsnitz, got into an argument with the church advocate, Brun von der Pforte, the Saxon rulers interfered the action by attacking Hans von der Ölsnitz in favour of von der Pforte, occupied Rathen starting in 1467 and finally destroyed the fortresses by the end of May 1469. After that the land was declared fief. 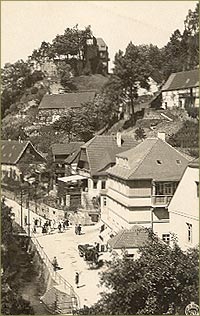 The former rulers of Rathen, however, belonged until the decline of the Holy Roman Empire of the German Nation(1806) to the Bohemian crown according to fief law.

Equally early the quarrying of the sandstone started. Already in an annual invoice of the year 1388 from a Dresden bridge builder, expenses for stones from Rathen can be found.The quarrying and shipping were the main sources of revenue until the beginning of the 19th century. Starting in the early 19th century new sources of income were found namely hop-cultivation and increasing tourism. While the first was just of short existence, the latter has steadily increased its importance. To fulfil tourists' expectations the construction of the Amselsee (Lake Black Bird) was finalised in 1934 although it was already planned and suggested in 1892. The famous natural theatre "Felsenbühne" was completed in 1936. Since the same year the location Rathen was allowed to hold the title "spa". The creation of a National Reserve was in 1938. 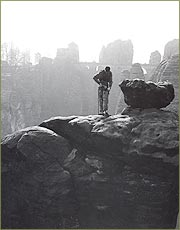 During war times Rathen was not spared from damage. In 1639, during the 30-Year War the Swedes invaded Saxony, burnt down the farmyard belonging to the farmer George Krämer from Oberrathen and continued their march to Königstein in order to turn even this nice little town into ashes and rumble.

When in 1706 in the Nordic War the Swedes invaded Rathen again the Rathen inhabitants fled into the surrounding mountains.The dweller Christopf Hase left an inscription referring this event in the massifs of the Burg Neurathen. In the Seven-Year War Rathen was occupied by the Prussians, who built a bridge at the beginning of October of 1756 and with doing that they connected the two parts of the town ,Oberrathen and Niederrathen, for some days. 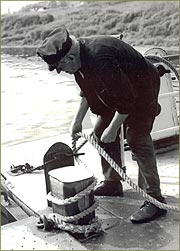 In autumn 1813, during the Napoleon Wars, French soldiers were in Rathen and looted whatever there was left. But the inhabitants hid their cattle in the nearby caves like Christian Gottlieb Hering in the cave called the Vehmhöhle.

The oldest restaurants are the "Hotel Erbgericht" in Niederrathen (first mentioned in 1470 as the seat of the judge), as well as "Ettrichs Hotel" in Oberrathen (built in 1851). They were followed by many cafes and restaurants. Some of them vanished after some time like the hotel "Armida" in Niederrathen or the café "Café Marienhof", and others were rebuilt in a totally new style like the hotels "Amselgrundschlößchen" and "Elbschlößchen".

The "Alte Mühle" in the Amselgrund, at those times for cutting and grinding wheat seems to have its origin already in the times of the fortresses. The nearby Mühlteich (mill pond) collected the water of the Grünbach (Green brook) and with this water power it was possible to run the millwheel. Of all the millers, the Kotte family were the ones who stayed there the longest (from 1791 to 1903). The "Kottesteg" above the Grünbach has been named after the last miller in Rathen and its alderman Friedrich Herrmann Kotte (1833-1917). 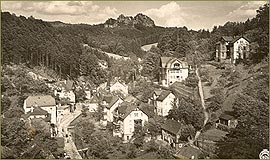 Clerically, Rathen belonged to Königstein. Religious groups having their homes in the houses "Felsengrund" and Friedensburg settled in Rathen after World War I.

Already in 1680 Rathen had its own local teacher.The children from Oberrathen went to the school in Weißig. The school house in Niederrathen was built in 1874 and closed its doors in 1980.