The Lilienstein is the most significant table mountain massif in the Saxon Switzerland. It is the only one on the right side of the river Elbe and belongs to the National Park Saxon Switzerland.Because of its beautiful view from the top it is one of the most visited ones.

Proof of very early settlements or visits gave historical ceramics found there. The first documentary mentioning was in 1379. On its top was a little Bohemian fortress of one of the Bohemian kings and it is supposed to be part of the fortress Königstein. In the 15th century it changed ownership into the hands of Saxon rulers. Today a hiking track leads through remains of this fortress.

August the Strong initiated to build a stairway in the south, to be able to climb up the Lilienstein. At the Osthorn, an obelisk reminded people on this occasion, but it has vanished to our regret. In the mid-19th century a so-called “flying restaurant” was established. In 1873 they built the first stationary building which was extended from 1895-1903.In 1873 a wooden observation deck was built. Since 1893 a cableway for goods has been providing the restaurants with food.

Due to the occasion of the 800th anniversary of the Saxon rulers the Organisation of the Saxon Mountaineers erected an obelisk in 1889. Today’s north climb was built on the former hiking track in 1900. In the end 90s the restaurant which needed some reconstruction urgently was renovated and serves the hikers need to rest and to be spoilt with food. 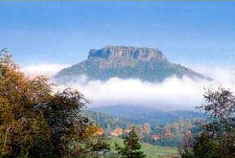