The ferry as a transport means has been in existence for centuries. It served the purpose to make use of waterways by following the old tracks of trade as well as a transport means for locals. In former times the physical power of humans was needed to move the ferries due to the fact that there was no machinery.

There were little boats and rafts which were moved along the river by using oars or being punted. Only much later in the middle of the 17th century the Dutch recognized that the current of a river could be used to move a ferry while using the power of the water movement.
In contrast to high - and low-rope ferries this ferry is held on a rope some hundred metres long, which is fastened to a fixed point upstream. From this fixed point to the body of the ferry there is a rope which is held by many buoys. The rope prevents the ferry from drifting away. Before it reaches the body of the ferry it splits into two ropes - in German they are called "Die Gierenden" These ends of the rope are brought into a special position by an electric or manpowered winch so that the ferry stands crossways to the current of the river. The power resulting of this position pushes the ferry across the river. With the ferry in Rathen the crossways position is reached without the two ends of the rope, but by using two big rudders. A means of transport or a plane which longitudinal axis differs from its direction , which means it is in a crossways position is yawing- in German "giert"- this word is of Dutch origin. Ferries which cross rivers in this way are called "Gierseilfähren" yaw rope ferries.

The ferries swinging to and fro around their own fixing point are of disadvantage in comparison to the high-rope and low-rope ferries in that way that they have to be at the river bank when there is traffic on the river or they are resting. If the ferry rested at the other side of the bank this would make ship transfer on the river Elbe impossible due to the rope and the buoys stretching across the river then. At the moment there are still 56 ferries of this kind in Germany which is extremely environmentally friendly. 18 of them on the river Elbe, 13 on the river Weser, 6 on the Saale, 6 on the Danube and 4 on each the river Aller and Rhine, as well as 2 on the Mosel and one each on the Neckar, Inn and Alz. Altogether these car ferries total 45 with a rectangular cross-cut, 9ferries for transporting passengers in the shape of a normal boat and two ferries with a rectangular platform. The load- capacity is between 2.8 and 45 tons, boat ferries can carry between 8 and 30 people and the two big passenger ferries can carry 120 to 322 people.

The river Elbe once had the status of a lifeline. Already in the magazine "Sachsenspiegel" (1215-1235) one could find charges quoted for the transport across the river: 4 pedestrians -1 pfennig, one horseman -12 pfennig and a loaded carriage - 4 pfennigs. But this was of minor importance for Rathen. Only with the development of tourism the transport business across the river was gaining importance. Around 1800 a reliable captain was appointed chief ferryman by the local authorities. Since 1816 the ferry has been leased, Karl-Gottlieb Jähnichen was the first tenant. He was leasing the ferry for 12 years and had to pay 12 talers rent annually. He was succeeded by the ferryman Karl Gottfried Grahle in 1828, he lived at the end of the village and was doing different jobs during the day, so that he had to be called, when someone wanted to cross the river.

Since 1911 the ferry steamer "Rathen Bastei" crossed the river even when there were floods and ice, it was replaced in 2001 with the ferry "Ratiner". In 1954 the rope-ferry Bergland was bought, originally wooden it was reconstructed in steel in 1970. The capacity of this ship is 322 persons.

When you have the time to rest at the place where the ferry docks and you start watching the people who are waiting and who are astonished enough about this very special transport means without a motor , which is very rare in our modern times- then it becomes more obvious how special this way of transit is.

Together with the beauty of its surrounding landscape this ferry creates a very special feeling of reflection and relaxation which is transferred to the persons waiting for it to come across in that way, that even strangers who have never met before start a conversation about this region and its happenings or even events they have experienced. This peace and reflecting friendliness is found along the valley and in their inhabitants all the time. This gear-rope ferry is a relict from the "good old times" 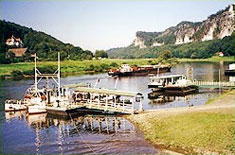